By BBC Trending What's popular and why 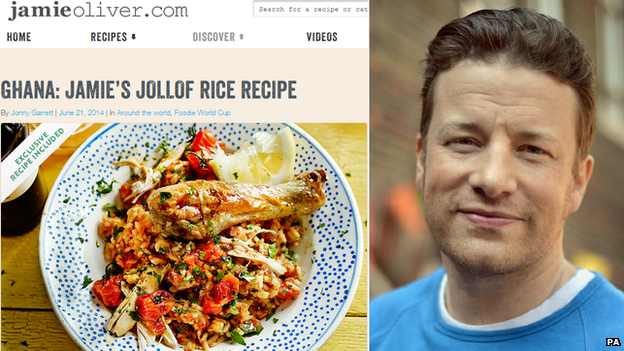 If there's one thing West Africans don't want you messing with, it's their Jollof rice. Or at least that's how it seems from the online reaction to Jamie Oliver's recipe for the dish.
Here's how to think about Jollof rice: it means to West African nations what paella means to the Spanish, what fish and chips means to Brits or what burritos mean to Mexicans. The traditional dish is made with tomatoes and spices and it's widely considered part of the heart and soul of the region. So when British celebrity chef Jamie Oliver published his own "interpretation" of the dish on his website, there was always the potential for controversy. 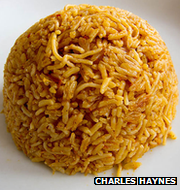 Traditional Ghanaian Jollof Rice
His recipe was posted in June and went largely unnoticed for months - until this week. The reaction from Africans began with dozens of comments posted on the chef's website in the past week. The conversation then moved on to social media where it escalated. The Oliver recipe has attracted 4,500 comments, a large number of them seemingly from Africans - and many outraged at what they say are changes Oliver has made to the traditional recipe. In the past 24 hours Twitter joined the debate using hashtags like #jollofgate and #jollof.
Oliver is known for his quick, simple dishes, but it seems that with his Jollof rice recipe his sin was trying too hard. He uses coriander, parsley and a lemon wedge, ingredients that users online say are not usually associated with the recipe. But what really offended them was the 600 grams of cherry tomatoes "on the vine". Jollof rice is popularly made from using a mix of blended, tomatoes, onions, bell peppers and scotch bonnet. "This is the base," says Lohi, a Nigerian food blogger. "Jamie's recipe called for whole vegetables!"

"People were surprised that this recipe was so much different from the original," says the author of the Motley Musings blog, which writes about how Africa is represented in popular culture. She warns that people in Africa take their traditional food very seriously, although Oliver does stress in his recipe that he's aware of and has considered the many traditional variations of the dish and has "come up with his own kind of rice".
By creating this recipe Oliver has increased the exposure of the dish. Vera Kwakofi, from BBC Africa, says that's part of the problem: "The danger is that in five years his version will become the official one." The blogger behind Motley Musing agrees: "We have to ask ourselves who actually benefits from Jamie Oliver's 'appreciation' of Jollof rice. This doesn't necessarily translate into value for Africans. For so long, different African cultures have been appropriated without any direct benefit to Africans themselves, and people are particularly sensitive to this."

This is not the first time social media users have targeted a Jollof recipe. Last June the supermarket chain Tesco removed its Jollof rice recipe from its website after complaints on Twitter said it had nothing to do with the real thing. A spokesperson for Jamie Oliver told BBC Trending: "Obviously there was no intention to offend anyone which is why the recipe printed on the Jamie Magazine website is described as 'Jamie's twist' on jollof rice."
Reporting by Gabriela Torres
Publié par PA DIEYE à 04:39