Fed up with the lack of opportunities at home, the majority of young people in Senegal dream of emigrating, even though the route to Europe is fraught with danger. Will new courses to teach them skills - such as DJ-ing - be enough to stop them leaving, asks Nicola Kelly.
"We Senegalese, we are the black Chinese," Amadou tells me, flicking his waist-length dreadlocks over his shoulder and tugging his baseball cap firmly down. "You give us one dollar, we make two!"
Behind us, the dull thud of the bass reverberates and the slap of hands marks the beginning of another day at the Maison des Cultures Urbaines in the northern suburbs of Dakar.
Senegal, one of the starting points for many migrants on the now well-trodden and ever more life-threatening journey through Libya to Europe, has been hit hard by the outward flow of its bright young things. A recent poll by the Oxford Migration Observatory found that three quarters of Senegalese aged 19 to 25 said they wanted to emigrate in the next five years.
Aware of the situation, local municipalities have stepped up funding for initiatives like this, a DJ school for aspiring musicians. Here they teach technical skills, help young people with their CVs and train them in interview technique.
DJ GG Base is a well-known figure around these parts. He gestures to me to come forward as he takes to the decks, nudging his novice assistant aside to show him how it's done. The students huddle around. Smartphones are pulled out of pockets, videos recorded.
One of the group, Ismaila, elbows me and jabs his thumb in the direction of his master, head shaking in disbelief. I take this to mean the demo is exemplary.
After posing for photos with the untouchably cool maestro DJ, I am initiated into the group with an official title: La Petite Tigresse - The Little Tigress. A plastic chair is pulled up for me and a cup of instant coffee laced with four sugar lumps thrust into my hand. We discuss their training, aspirations and their lives in Senegal.
"You have iPhones, Apple Macs, fancy DJ decks. One of you has a shiny car outside. Life here can't be so bad!" I protest.
"Yes," they admit, "but most of our brothers, cousins and friends have left us behind to travel to Europe. We want to play in the big clubs. We want a future and that is just not possible in Senegal."
And it's this that the centres have been set up to do - to give young people like Amadou and Ismaila a chance to reach their potential. Many of their peers are bored, disaffected, even - and that is leading some into trouble. They nod in unison when I ask them if programmes such as this help to keep them off the streets.
"We have a growing problem of jihad here in the suburbs. If we don't occupy the youth, the youth will occupy themselves," Amadou says, voice gravelly, assured; tone frank.
Later that evening, I take a stroll along the beach with Amadou. As night falls, this tiny strip on the waterfront is converted into a beach gym. Lithe young men shuttle back and forth between pebbles marking their distance. Some repeat push-ups until they can stand it no longer - drops of sweat glistening on their foreheads as they sprint backwards up mounds of sand, then pose proudly at the top.
They beckon me over and I tell them their use of the sand is very resourceful. They are lifeguards, waiters and security guards. "I want to go to Europe to work in construction," Oumar says wistfully, eyes fixed on the horizon, face determined. "When I have money, I will return home to Senegal and build a house for my family."
The sole woman in the group - their "sista" - pipes up to ask where I am from. When I say I'm from London, their expressions switch from mild curiosity to sheer delight. They talk quickly in Wolof for a moment, then switch back to French and tell me stories of their friends who have made the journey to Europe.
"I want to go too, but when I have a family I will move back to Senegal to live among our traditions, to teach my children our language," Sorna says decisively, her eyes flashing, enlivened by the idea. The men murmur in agreement.
I ask what it would take to keep them here in Dakar. "We need more than words," Amadou says. "We need a framework, a way to find good jobs and learn new skills. Only then will people like us decide not to get in those boats and cross that sea."
BBC
Publié par PA DIEYE à 09:21 Aucun commentaire: 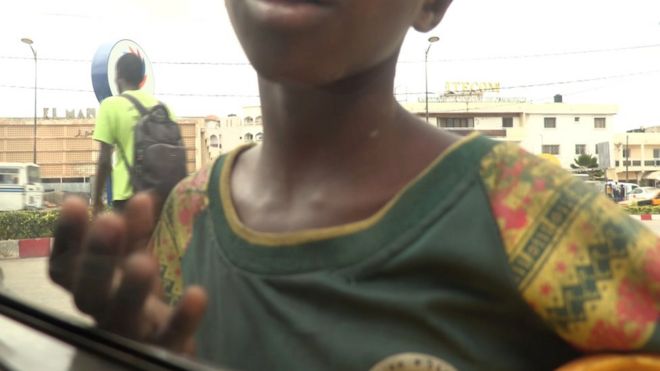 Some children have been beaten if they do not bring back enough money to school
Bas du formulaire
Haut du formulaire
Bas du formulaire
Four-year-old Ousseynou screams, struggles to breathe and uses all his strength to try to loosen the grip of the two plainclothes policemen who are part of a team cracking down on child beggars in Senegal.
They drag the small boy into a minibus - he is shoeless and wearing torn shorts and a dark blue shirt that is at least three sizes too large.
Ousseynou is one of an estimated 30,000 children who beg on the streets of the capital, Dakar.
"This is the emergency phase of our operation," says Niokhobaye Diouf, the national director of child protection.
In the past, Senegal's authorities have been accused of complacency over tackling child begging.
But in June the president ordered "the immediate removal of all children from the street".
Since then more than 500 children have been "extracted" from the streets by a child protection unit.
On the bus sit another 30 boys, aged between four and 13 years old, who are being taken to a shelter.
Ousseynou will not stop crying, saying that his marabout, or spiritual guide, is waiting for him at a Koranic school on the outskirts of Dakar.
It is common for Senegalese Koranic schools to send their students, known as "talibe", out to beg for food and money.

"A child's place is not on the street, but how else can we provide for them?"

In the poor suburb of Sica Mbao, about 75 talibe beg for food and money every morning, from between 07:00 and 10:00.
Koranic teacher Alioune Badara Seydi argues that poverty and lack of state support leave the schools with no other alternative.
"These children are sent to us by parents across the country who live in extreme poverty, but who want their children to learn the Koran," he says.
"A child's place is not on the street, but how else can we provide for them?" 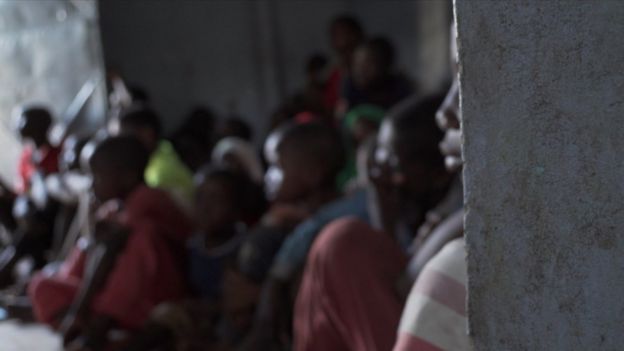 Some marabouts believe that begging teaches humility
He goes on to explain that the religious education they provide is valuable and begging teaches humility as well as reinforcing solidarity within a community.
"Many of the children that have been educated in this Daara [Koranic school] became important marabouts," he says.
When most of Senegal's population lived in villages, begging seldom led to exploitation, and did not expose the children to the hardships of a big city's streets.
Beatings and abuse
In Dakar - which has a population of more than a million people - it is a different story.
Children have reported being beaten if they fail to earn the sums demanded by marabouts, which can range from between 350 CFA ($0.50, £.049) and 500 CFA. 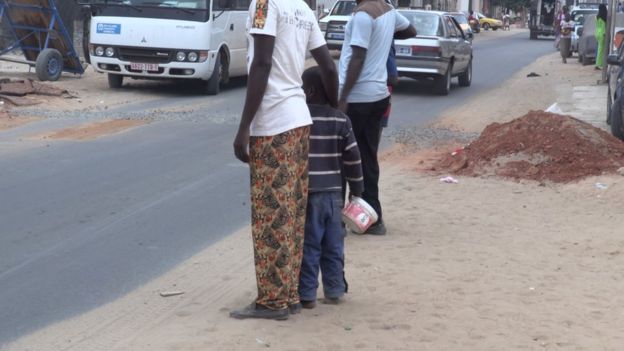 Undercover police have started rounding up children who have been sent by their school to beg
At least five children living in residential Koranic schools died in the first half of 2016 allegedly as a result of beatings meted out by their teachers or in traffic accidents while being forced to beg, according to a Human Rights Watch (HRW) report published in July.
Dozens of other children have been severely beaten, chained and sexually abused or violently attacked while begging over the last 18 months, the report said.
Although arrests of abusive teachers have increased slightly over the past year, courts in Senegal have prosecuted only a handful of cases and prosecutions for forced child begging are almost never pursued, HRW says.

Activists say leaders have been worried about the potential political fall-out of such arrests.
"Politicians don't want to upset influential Muslim leaders," says Moussa Ndoye, who is in charge of a community project aiming to reduce child begging.
"I have yet to see any strong actions to support the president's recent declarations." 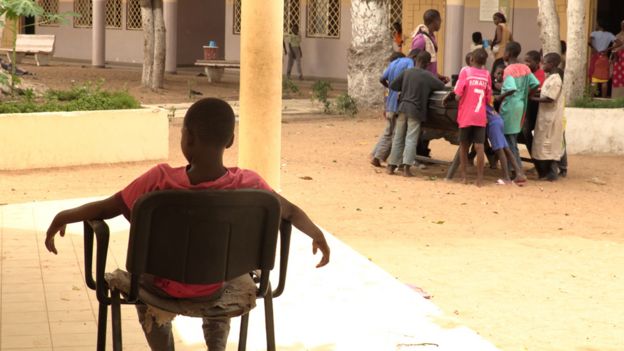 The children rounded up are taken to a centre where they wait to be collected by their guardian
But authorities argue the "removal" operations which started in June have already had an impact.
"This is the first time the police have ever forcibly removed children from the streets to protect them," says child protection director Mr Diouf.
"Already there are visibly less children begging in the city's business centre. We know some marabouts are returning to their villages".
'Koranic schools to be registered'
But Mr Ndoye believes these measures are insufficient.
"It makes no sense to just pull children off the streets, no thought has been put into this action, there is no plan," he says.
"The action must be clearly mapped out and funded and involve the entire community. The state and the marabouts must speak to each other." 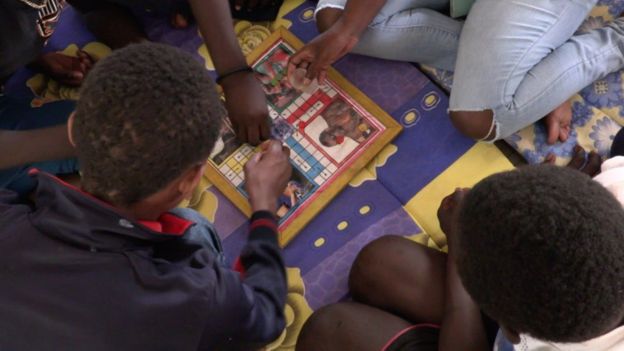 The children are provided with clean clothes, medical care and food at the centre
Mr Diouf does concede that policing the streets in search of children will not be enough to end the practice.
He says the authorities are in the process of registering all of the Koranic schools so they can be properly regulated.
At the state-run shelter for rounded up children, Ousseynou is provided with clean clothes, medical care and food.
The children's guardians, either their parents or their marabout, will be summoned to pick them up.
They will be issued with a warning: If the same child is found on the streets again, they will face prosecution.